Posted on September 3, 2012 by davebakersoccer 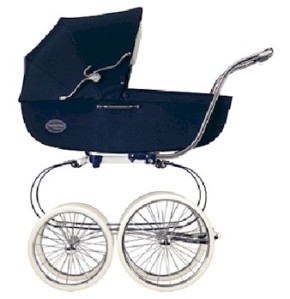 I was going to write a nice long piece about going shopping at supermarkets, but quite frankly it bored the hell out of me. So I scrapped that for now. I tried, honest I did to finish it, but it just wasn’t going anywhere.So it was time to move on and write about something else. Which is good because while I was staring at the page pondering if I should mention Golden Nuggets breakfast cereal I had a couple of better ideas.

One of these ideas was to ramble on about the 1980s again. Well a small part of it.

We got our first VCR around about 1984 just about the same time as Channel Four showed up. For Americans and people born after 1984 in the UK in the homeland for most of my youth we only had three TV channels. BBC 1, BBC 2 and ITV. Now-a-days there are twenty million channels and still nothing on. Back in the days of the three channels, there was always something on. Benny Hill, The Young Ones, Porridge, Open All Hours, Tales of the Unexpected, Top of The Pops. 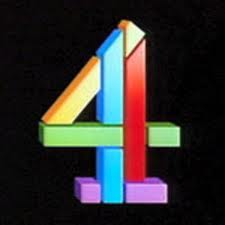 Channel Four popped along and was supposed to give us more of always something on. What we got was Countdown, Fifteen to One and the Paul Hogan Show. Not really stellar stuff but still worth watching. Until we got the afore-mentioned VCR.

A VCR meant you could watch any show you wanted, when ever you wanted. Novel stuff back in the day. I would tape sit-coms and watch them over and over, something I still like to do. Back then it was The Young Ones, or Hancock’s Half Hour*. now its The Big Bang Theory (Possibly the greatest sit-com ever).

Then came the movie rentals. Not your Blockbusters or your Hollywood Video stores. Oh no, it seemed every small store had videos to rent. And they had all the classics. OK they had all the really bad movies that no one would ever want to watch. I remember renting Escape to Victory, over and over because it was the only thing I recognised. That and Smokey and the Bandit and the Cannonball Run.

People didn’t buy movies back then, and there certainly wasn’t a Wal-Mart $5 bin. So the creative amongst us did what we could. We found someone else with a VCR and linked them up and copied as many tapes as we could.  Remember kids, home recording is killing the movie industry. That would be why they have billions of more dollars than I do.

One of the films that I acquired by my skills at hooking up VCRs was the underrated classic, Electric Dreams. A movie way, way, way ahead of its time. 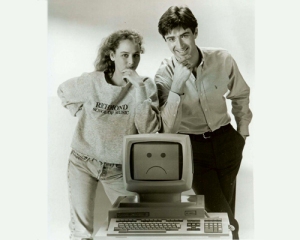 The movie starred that mega-star of the screen, Lenny Von Dohlen.

Ok he was in Home Alone 3 and a load of TV stuff.

His biggest role has to be Miles Harding in Electric Dreams.  Miles is an architect who wants to design an earthquake-proof brick. Struggling with this he goes and buys a computer which helps him with everything in his life. It can lock the doors, turn the lights off. Very handy indeed. It also helped him with his work. 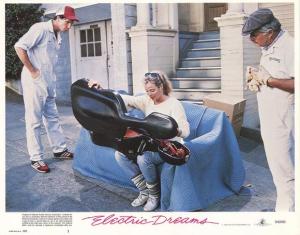 Virginia Marsden with her cello!

In the meantime Madeline (Virgina Marsden – in her second movie ever) happens to move in the apartment above Miles. She plays the cello and is involved with a big orchestra. And of course that becomes the love interest.

So what do we have here? Geek with computer. Love interest. Music. All good so far. So What could go wrong?

Miles just happens to spill something over his computer that ruins it. Or makes it better depending on your point of view.  Trouble is the computer, voiced by Bud Cort (just saw on IMDB that he was in Dogma – another great movie), now has a life of its own. And he has fallen in love with, you guessed it, Madeline.  The computer flirts with Madeline through music and Madeline falls for it. Well she falls for Miles, who she thinks is creating the music.

OK it gets really sad because Edgar (the computer) gets obsessed and jealous.

I don’t want to spoil the ending for you if you have never seen it. But here is the problem. I went on Amazon looking for a copy to show the kids, and I can’t get it!  The 1984 minor hit is available on DVD, but only region 2!  I’m in region 1 dammit!

I want to see this movie again!!

Until I do I’ll have to make do with the soundtrack. Great songs from Phil Oakey, Jeff Lynne, Culture Club. I have them on my I-phone and have been enjoying being “Together In Electric Dreams”

*There will be a blog entry about the great Tony Hancock at some point.

I am a person who has always had too much time on their hands, and instead of creating a masterpiece or taking on the world, I have spent my time on nothing important at all.
View all posts by davebakersoccer →
This entry was posted in Movies, Television and tagged channel four, classic movies, comedy, drama, edgar the computer, electric dreams, entertainment, gaming, golden nuggest, my dog just ran away, paul hogan, supermarkets, travel, vacation. Bookmark the permalink.