A while ago I posted about my first love, now as promised is part two, Love/Hate.

I want to admit something now, it’s kind of hard to talk about, but as they say if you get it out in the open, someone else can suffer along with you. Back in 1977 I tried something,  I had a little taste and I liked it, so you try some more. You try to be careful, try not to get addicted but then you get a huge rush and you are hooked, the highs are so sweet but they come so few and far between, and after thirty-five years I still have the monkey on my back and it will never go away.

In 1977 I hadn’t been to any games, but my future Brother-in-law was a Town fan and I was bugging him to take me to see them play.  I was eight at the time, and I’m sure he just didn’t want to take me because of my age. Or because who wants to have a kid hanging around with them.

Then this happened. May 6th at around 4.37pm Roger Osborne fired home the winning goal of the 1978 F.A.Cup final at Wembley Stadium. I was watching the game on T.V. and as soon as the ball crossed the line I was hooked. The next twenty minutes were the most thrilling of my then nine-year old life. Arsenal had been the favorites on the day, Ipswich stood no chance according to the papers, but Ipswich played a great game and if it hadn’t been for the woodwork Ipswich could have won by four. Those last minutes seemed to last forever though, Arsenal trying their hardest to score and Ipswich defending as tough as they could. It was pure magic and relief when referee Clive Thomas blew the final whistle. Ipswich had won 1-0 and captured my heart. 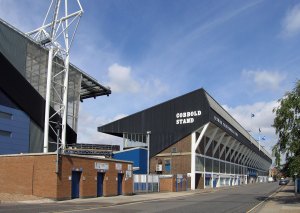 My Brother-in-law took me to a pre-season game Ipswich town played Bury Town at Ram Meadow in a pre-season friendly it was great I got to see the cup winners up close. I wanted more though and It wasn’t long (ok a year!) before I got to go to my first REAL game. Ipswich Town vrs Coventry City at Portman road 1979-1980 season. This was the day I became on of the North Stand boys, and learned some words that my mother would not want me repeating. Coventry turned up in a brown kit that to this day is still laughed about. The game though was a disappointment Town lost 1-0 to a goal by Tom English. I was still young and enjoyed the game, the next game I enjoyed even more and helped feed the addiction that is football. Ipswich played Oslo 1979-80 U.E.F.A. Cup. Ipswich won 7-0. a result like that was a great high, but then the following season really banged the final nail in. after the 1980-81 season there would be no backing out, not giving up, I would be a true blue forever.

For those who remember the 1980-81 season was the one where Ipswich came so close to winning the treble. For those who don’t know that is when you win three competitions in one season. Up until then to my knowledge no one had done it (if you know better leave a comment) Ipswich were in line to win the League, F.A.Cup and U.E.F.A. cup.

I went to a lot of games this season, all of them fantastic. The game versus Liverpool was awesome, a sell out with people packed so tightly in the North Stand that they had to move people out to be safe. The game was a 1-1 draw but the atmosphere was something that still resonates deep inside. The League game versus Manchester City was a wet one, it rained hard so all the fans pushed as hard as they could to the back of the stand, (back then there was no all seater stadiums)  I on the other hand stood at the front, getting soaked through, Terry Butcher scored the winner from the penalty spot, but what was more impressive was that because I stood at the front I was clearly visible on Match of the Day on BBC1. The following cold was well worth it.

Ipswich won the U.E.F.A. cup that year, lost the F.A.Cup in extra time in the Semi-Final, and finished second in the League to Aston Villa. 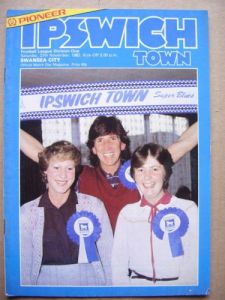 During the 1982-83 season I stood behind the dugouts in the new Pioneer Stand, I got to see the Legend Bobby Robson work up close. Before the game versus Swansea City I was standing on my milk crate so I could get a better view, I was busy watching assistant coach Bobby Ferguson who was busy looking at something else. I really should have been watching what he was watching. Slowly his gaze turned until he was looking directly at me. What he had been watching was the ball kicked by Swansea keeper Dia Davies which was flying towards the touch-line at an impressive speed, its speed only slowed down when it smacked into the side of my head. Now if it had been here in America I’d have been given all sorts of goodies so that my folks didn’t sue. This however was England and all I got was pointed at and laughed at!

This is where being a true fan comes in, because after Bobby Robson left to become England Manager, Ipswich went down hill fast. relegation, wilderness, poor results, not a lot so sing and dance about until 2000.

The play off final at Wembley was a great game, and un-like the 1978 cup final I was actually there. Town played Barnsley in the final, and like Town always do they went 1-0 down just to make things more interesting. Ipswich went on to win the game 4-2 and when Martijn Rueser put that last goal in the party began. The following year Town showed me loyalty for following them through the dark years. The Premiership tickets were pumped up in price and I couldn’t afford to go. The rest is history as I moved to the U.S.A. in 2002. Town has gone back to wilderness and as I write it is looking pretty bleak this season. I get my updates on my phone, I watch games whenever Fox Soccer shows a game from the championship. But for the most part I just sit disappointed at the results.

It is a love affair that I will not be able to give up, I shall go to my grave an Ipswich fan, I just hope before I die they have some more glory days.