Posted on November 23, 2011 by davebakersoccer

For those who remember the good old days when you could buy two fruit salad chews for a penny and wrestling was always on the TV after the football results on a Saturday, there were two options ways you could go in toys. If you were a boy, that is. You either wanted Scalextric or Subbuteo.  I was a Subbuteo fanatic. The table soccer game that ruled. Yeah you can argue that Striker with the push down heads was fun, but it never had the following of Subbuteo. 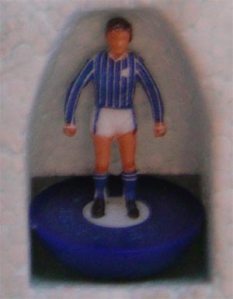 I had numerous teams, the above Ipswich Town won more games than the lost for some reason! I had all the accessories for that complete match atmosphere (strains of Half Man Half biscuit ringing in my ears), including scoreboard, floodlights and complete all seater stadium to go all around the pitch.  Though I only had about twenty spectators to fill the whole thing! It looked like a West Ham United home game every day.

My set up looked something like the above. though mine also had the TV tower! Each week I’d unpack all the bits and bobs and take part in some made up tournament or league, sometimes I’d even let others play, though due to me making my own home ground rules I never seemed to come second.  So I cheated, it’s what kids do, right?

Those who remember the game will remember the catalogue that used to hit the shops around christmas with all the new accessories such as the St.Johns ambulance men and stretcher, the policeman to patrol your twenty fans, and the dugout with subs, coaches and manager in the sheepskin coat. Also it had all the team colours. You could always double up your Liverpool team set as Scunthorpe United or Ipswich Town as Stranraer. That may be why I’ve always had a soft spot for Stranraer? 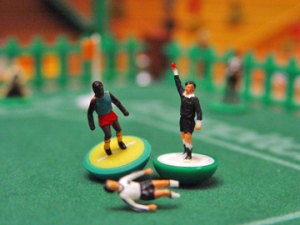 Time goes by and things more ever onward, but Subbuteo is one of those things that given half a chance I would relive. I understand it goes by another name now, but you can still get your sets from Subbuteo World.

As all good bloggers should do, I’m updating this post because I found this great subbuteo realted video.

I am a person who has always had too much time on their hands, and instead of creating a masterpiece or taking on the world, I have spent my time on nothing important at all.
View all posts by davebakersoccer →
This entry was posted in Football/Soccer, games and tagged football, half man half biscuit, ipswich, ipswich town, liverpool, scalextric, scunthorpe, stranraer, Subbuteo, table soccer, toys, west ham united. Bookmark the permalink.