Another computer game that kept me holed up in the pit that was my bedroom. The Biz by Virgin games has become a cult classic over the years.  Not just because of the gameplay but because of what came on the cassette. 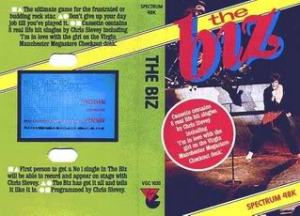 Written by the late great legendary Chris Sievey this game contained no less than eight of his classic songs from the band the Freshies. Including “I’m in love with the girl who works on the virgin Manchester megastore check out desk, Wrap up the Rockets and If you really love me buy me a shirt.“ And if that wasn’t enough to sell you on the game, the first person to get a number one single would win a chance to appear with Chris on stage!

The idea is to become a mega rock star, you had to name your band, mine was always Turbo Esprit (poor mans Lamborghini). Then you had to get out there and make money, but how can you make money if you are no good? 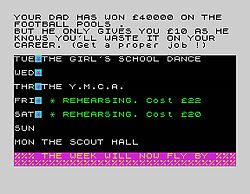 The fine balance between rehearsing and playing a gig was the hardest, you had to get that song quality and stage pressence up if you wanted to have that hit single and that chance of being on Top of the Pops! 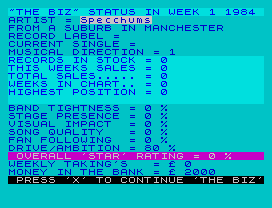 Playing the game was fun. getting that number one was tough. Seeing your biggest rivals being at the top each week got frustrating and a young man like myself who knew his way around a 48k spectrum also knew a way to make things easier.  Hack the simple basic progaming.  I’d give myself unlimited money, be the best and get to stay top of the charts week after week.  I also changed all the other songs that were in the database to stuff that I liked.  I also got the code for the competition to be on stage, but never entered for fear of being caught cheating!